Below is the story of Tully, a golden retriever who developed an infection and kidney problems after neutering. Tully’s human parents went through a nightmare! Fortunately, after this ordeal, Tully is doing well. Read his story here, direct from Tully’s caring and devoted human mom.

Before Tully Came Along…

As dog lovers know, to lose a dog, it is as hard or harder than losing a member of our human family – soul wrenching. I honestly thought at the time, I cannot do this again. My husband was so distraught that I didn’t think he would ever come out of it. He hadn’t cried this much when his own father passed.

Months went by and we were told about a litter of goldens. Reluctantly, I told my husband it was OK to ask this particular breeder about them. Of all the golden retriever breeders there are it turned out that Buddah’s dad was the great grandfather to this litter, what were the chances of that?! There were more signs that just couldn’t be ignored – meant to be.

In March 2019 we picked up a puppy and named him Tully, meaning “peaceful one” or “one who walks in peace”. He was a very easy puppy, the easiest we ever had.

When he was about 8 months old we were advised to have him to be neutered. He had Cryptorchidism, a condition in which a male dog’s testicles have not completely descended into the scrotum so having surgery or not, wasn’t really a choice.

Three days after this surgery Tully ended needing an emergency surgery at a large hospital for a sepsis infection. 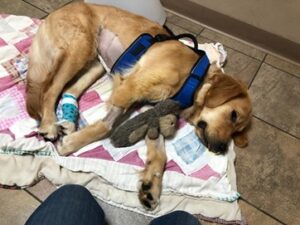 He was hospitalized for 10 days, home then another emergency surgery, then we were referred to Tufts Veterinary Hospital in MA, which resulted in 2 more surgeries. About 5 weeks total spent in hospitals -he lived! 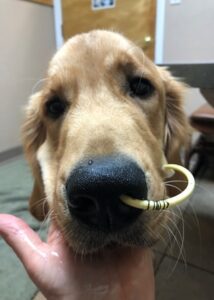 End result, however, was a damaged kidney which we need to watch for the rest of his life.

I was advised that diet was everything for him.

Then all roads led to Sarah Whitman, The Dog Food Coach.

I cannot even begin to express how kind and compassionate she has been since first contacting her. With Tully’s story, she was able to guide me to kidney healthy foods, guide and support me through the process of “home cooking” my dog food.

Before Sarah I had spent hours and hours reading about dog foods and chose a kibble that I thought was better than all the others. Today, I wouldn’t touch it.

After being on this home cooked diet for a few months Tully had blood work done and it was better than it had ever been. Overall better, the kidney values were totally normal. First time since before all the surgeries. 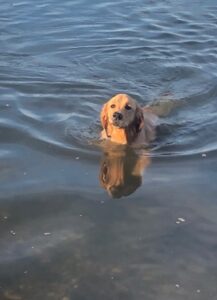 We are so grateful to Sarah. There is no doubt that we will be feeding this diet to Tully for the rest of his life. Today, he is a happy, healthy, playful boy with a very sparkling coat. Thank you Sarah!

“We can’t thank you enough for helping us to turn our dog's health around. He was showing signs of pain, symptoms of arthritis and joint discomfort, and was even having trouble getting out of the house. We always tried to make the best choice on his food, sparing no expense, looking for the best brand. Dog food recalls always had us concerned. We started making his food, based on your recipes, and we noticed a difference almost immediately. We believe in what you are doing, and hope that others will learn what we have from you to help their pets live long and happy lives. ~ Cynthia & Mike

Let’s talk about your dog’s diet!

The information on this website and provided by Sarah Whitman is for educational and informational purposes, and is not intended to replace proper veterinary care. Please consult with your own (preferably holistic) veterinarian to ensure your pet’s medical care.